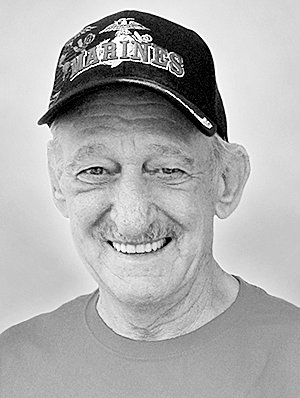 A funeral Mass for David Doocy, 76, of Bancroft, was held Monday, November 28, 2022, at 10:30 AM at Divine Mercy Parish St. John the Baptist Catholic Church in Bancroft.  Burial was in the church cemetery with military honors conducted by the Bancroft American Legion.

David J. Doocy, son of Nick & Anna (Lampe) Doocy was born December 9, 1945, in Emmetsburg, IA.  He attended St. John the Baptist Catholic School. From there he joined the Iowa National Guard from 1963 to 1971, receiving an Honorable Discharge with the rank of PFC E3 Expert (M14) and Marksman (Riffle M1). After Basic Training, he returned home doing various jobs in the area.  In January of 1966, Dave started working for Deitering Bros.in Bancroft.

On February 14, 1966, he was united in marriage to Mary Ellen Dixon at St. John the Baptist Catholic Church in Bancroft.  To this union they were blessed with 8 children.  His mechanical skills took him down many roads, from tractors to mowers and everything in between.  Many hours were spent in the garage repairing everything that was dropped off in the driveway.

He truly enjoyed anything with racing. A love for NASCAR was sparked from years of racing go-carts and cars with his brothers, and being crew chief and pit crew for his “boys”. That love of racing was passed onto his family.  Being an avid fan of Dale Earnhardt Sr. and Junior resulted in a substantial collection of memorabilia often gifted to him by his children and grandchildren.

After 42 years of dedicated work, Dave retired from Deitering Bros. in 2008. He continued to work various jobs in his garage until his health no longer allowed him. Dave could also be found at his grandkids activities, the weekly races, watching Mollie B Polka Party and cheering on the Green Bay Packers, a team he chose specifically to antagonize his children.

Oakcrest Funeral Services of Bancroft in charge of arrangements.  Online condolences may be made to www.oakcrestfuneralservices.com.