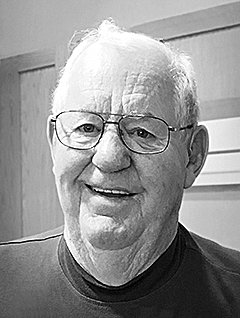 James Francis (Jim) Welp, of Flagstaff, Arizona, passed away from natural causes on Tuesday, May 24, 2022. Jim was born on June 21, 1932 in Bancroft, Iowa to Joseph Herman Welp II and Bernice (Wilhelmi) Welp. He attended St. John the Baptist Catholic School in Bancroft, and completed high school at St. Thomas Military Academy in St Paul, MN. He graduated from University of Iowa in 1956. In 1954, Jim and Margery (Ruth) Woolley began their marriage of 67 years.

Jim served 2 years in the US Army, then began managing the Welp Feed Mill and Grain Elevator in Bancroft in 1958. His brothers, Don and Joey Welp, took care of the Welp Hatchery side of the business. All three brothers farmed their family land and over the next three decades, expanded operations of Welp, Inc. to become an international business. Jim retired in 1987.

Jim and his family moved from Algona, IA, to Bancroft in 1961. He enjoyed playing baseball, football, and card games with his relatives, neighbors, and especially with his grandchildren. He loved giving kids rides on his motorized vehicles such as a scooter, tractor, truck, boat or camper. He was often involved with community events such as Chamber of Commerce and Knights of Columbus pancake breakfasts, parades, picnics, and setting off July 4th fireworks. After a few nomadic years traveling in an RV, Jim and Ruth settled in Prescott, AZ where Jim became an avid hiker. In 2021, they moved to Flagstaff, AZ.

Jim is survived by his wife, Margery Ruth Welp (b 1936) of Flagstaff, AZ, and 4 children, 11 grandchildren and 3 great-grandchildren:

- Jeanette (Welp) Asa, m. to Steven A. Jones of Chicago, IL; and her children, Imogene and Samuel Asa.