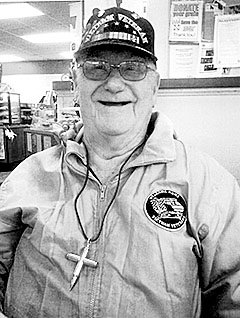 Funeral Service for or Bernard E. Burnett Sr.   will be held at the Our Savior Lutheran Church, Swea City, Iowa at 2:00 p.m., Thursday, August 4, 2022 with Pastor David P. Schultz as the officiant.

Visitation will be held one hour prior to the service at the church.

Bernie received his education in the Swea City School, graduating in 1951.

Bernard served our country in the United States Marine Corps from 1953 until 1973, serving in Japan, Hawaii, Okinawa and Vietnam. He retired as a MSGT. After his discharge, he returned to Swea City to work in law enforcement for the city and later drove semi over the road for ArtsWay and GKN for many years.  During his retirement years, he enjoyed driving cars for Bob Boland Ford.  As a young man, Bernie was interested in hunting and fishing and while in the service, bowling was his passion.

Bernie was married to Audrey Walker on April 1, 1956 and they had four children.  They later divorced and he married JoAnn Payne on December 22, 1982.  He and JoAnn had two children and later divorced.  On June 20, 2000 he was united in marriage to Sheryl Sanftner.  Sheryl died February 5, 2016.

He was a member of Our Savior’s Lutheran Church in Swea City, American Legion and a life member of the VFW.

He has been preceded in death by his parents; children, James and Deborah Burnett and their mother, Audrey; and wives, JoAnn and Sheryl.

In lieu of flowers, Bernie requested memorials be given to St. Jude Children’s Hospital or Shriners Hospitals for Children.  www.henryolsonfuneral.com