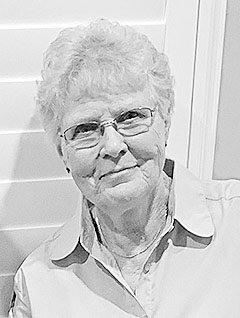 A Funeral Mass for Patricia Ann Doerning, 86, of Tempe, Arizona, will be held Wednesday, July 6, 2022, at 10:30 AM at Divine Mercy Parish ~ St. John’s Catholic Church in Bancroft. Burial will be in St. John’s Catholic Cemetery, with a reception following in the church hall.

Patricia Ann (Vaske) Doerning was born on a farm southeast of Bancroft on November 3rd, 1935, when corn was eight cents a bushel. She was the first of Edmund and Gertrude Vaske’s ten children. Patty remembered receiving her First Communion in 2nd grade with the help of Sister Arnolda and getting confirmed in 8th grade with Helen Froehle as her sponsor. In high school, Patty remembered the boys finally being taller than her. High school flew by for her and this is where she met lifelong friends Ruth (Becker) Elsbecker and Mildred Heiar. She was Salutatorian of St. John’s class of 1953 and loved having her little sister Maxine as her flower girl.

Patty’s love for baseball also grew in the town of Bancroft. After the new ballpark was built in 1948, she recalled going to a lot of games with her parents. She also enjoyed watching her 7 brothers play, her children and later her grandchildren play.  Many nights she could be caught watching the Bancroft Bandits at Memorial Park or watching the Braves on the television.

In 1953,  Patty began work at Security State Bank and became friends with Joan (Haupert) Mertz. Through this friendship, she met her future husband. Patty first met Ron at the Plantation Ballroom, and after two dates Patty was shocked when Ron asked her to write to him in California, while he served our country. She remembered getting a letter every Thursday from him. When Ron returned, they enjoyed polka dancing and waltzing together before he popped the big question. They were united in marriage on the 23rd of November, 1957.

Ron and Patty began their married life by moving to the Doerning farm in Bradgate, and in 1959 they welcomed their first child, Doug. Ten months later, they welcomed a second son, Dan. Their first daughter, Chris graced the home 11 months later. A little over a year later, a second daughter Carolyn was born. As if having 4 young ones wasn’t busy enough, they loaded up a U-Haul trailer and the Doerning clan moved to Arizona. While working at First Interstate Bank, Patty discovered she would welcome another child, Sharon to the family. At the end of 1969, the family moved back to Iowa, where their last son Paul was born.

After her retirement from Wells Fargo in 1997, Patty and Ron purchased a home in Bancroft across from the ballpark, where they would spend summers together visiting friends and family, playing cards, going to sales, watching ball games and attending mass together at St. Johns. In the winter, Ron and Patty lived in Arizona enjoying the warm weather and walking to daily mass at Mount Carmel Catholic Church.

Patty was an avid reader taking many trips to the public library or book sales with her daughter Chris. She was also a gifted quilter and enjoyed the quilting parties at her mother Gert’s home throughout the years. Her quilting talent can be found in many of the homes in Bancroft and Arizona. Patty also enjoyed gardening, having coffee with the ladies in town,  and making her delicious salsa or homemade jams. Her rhubarb pie and banana bread muffins will be missed!

Oakcrest Funeral Services of Bancroft in charge of arrangements.  Online condolences may be made to www.oakcrestfuneralservices.com.